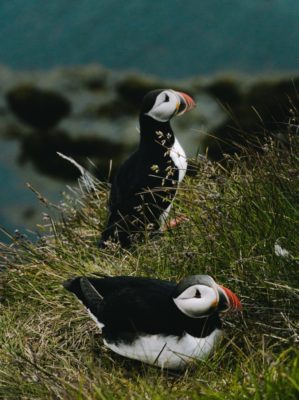 puffins. do we really need to say more?

That really irritating itch that you just can’t get. In the spot you can’t reach. When all hope seems lost and the satisfaction which should follow this action seems unattainable you realise something. Scratching sticks exist, finally a way to end the story in a content place. Ahhh, sweet satisfaction!

Puffins. As if their fluorescent beaks didn’t already make them awesome enough, researchers have now found evidence and added them to the notoriously short list of tool users. Amongst species such as chimpanzees and dolphins, this is very significant for not only for puffins, but also potentially for other sea birds who have previously been thought to lack the necessity of tool usage.

What makes this discovery potentially peculiar is their sweet use of these tools for something other than common usages such as food foraging, which is usually the first instance in which a species would employ an external device. Instead, it was to solve the situation presented earlier, to cure an insatiable itch. This low importance and yet incredibly pleasant task is an intriguing behaviour of the puffin and begs many further questions.

In the research paper, a tool user is defined as, “the exertion of control over a freely manipulable external object (the tool) with the goal of (1) altering the physical properties of another object, substance, surface or medium (the target, which may be the tool user or another organism) via a dynamic mechanical interaction, or (2) mediating the flow of information between the tool user and the environment or other organisms in the environment.

They have been observed in two different locations, Wales and Iceland, performing this same action and astounding scientists which suggests it is an instinctive quality of the species and not randomly occurring. Their usage is particularly special as tool usage is observed in less than 1% of known genera and whilst being known in other birds during captivity, is much less commonly found in natural habitats.

This discovery is not only another amazing addition for the puffin’s already impressive CV, but also prompts further questioning and research into the behaviour of tool usage and its display in certain species of animals. What this means for the future of the puffin and other birds, we may not know yet but one thing is certain – they are content and the future is as bright as their fluorescent beaks under a UV light.