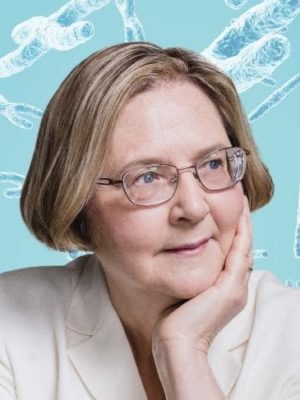 “a great scientist possesses not only the ability to identify patterns but also to endlessly question these, in an effort to attain the most base level truth.”

We stood, just in the lab, and I remember sort of standing there. I remember looking at it and just thinking, ‘Ah! This could be very big. This looks just right.’ It had a pattern to it. There was a regularity to it. There was something that was not just sort of garbage there, and that was really kind of coming through, even though we look back at it now, we’d say, technically, there was this, that and the other, but it was a pattern shining through, and it just had this sort of sense, ‘There’s something real here.’.

But then, of course, the good scientist has to be very sceptical and immediately say, ‘Okay, we’re going to test this every way around here, and really nail this one way or the other.’ If it’s going to be true, you have to make sure that it’s true, because you can get a lot of false leads, especially if you’re wanting something to work.

This was the moment she knew it was right, the moment she knew they had just discovered something amazing. And for this instant, Elizabeth Blackburn remains nearly 120 years following its inception, the sole female Australian to be a recipient of the Nobel Prize.

Elizabeth and her team researched telomere’s which are repetitive structures found at the end of chromosomes. The three main purposes are, help to organise, protect the end, allow to be replicated during cell divisions. They are a bit like the plastic tip on the end of shoelaces (aglet!), this prevents the chromosomes sticking to others however, each time the cell divides it loses some of the telomere’s. This is similar to when you use your shoe lace too many times and it begins to fray at the ends.

What makes these tiny structures important to you and me, is their responsibility in the ageing process. When DNA replicates itself, some of the string of telomere’s ‘falls off’ eventually reaching a critical point where the DNA is no longer capable of reproducing itself – resulting in an aged cell.

Blackburn was able to recognise this but more interestingly discovered an enzyme, Telomerase, which is capable of conserving this process and reforming these sequences. This action allows cells to continue their multiplying and avoiding ageing. This research could potentially also have significant applications in cancer treatment as it is found in incredibly high concentrations within these cells. This is the mechanism which enables tumours to divide and grow at rapid rates instead of reaching the same critical point. If there is low levels of telomerase, the cells will die however otherwise the cells will fix themselves, like the aglet preserves a shoelace. If the telomerase disappears, then the cell’s will die.

What I love about her description of the discovery is it highlights the creative brilliance of some scientists, “It had a pattern to it”, shows the innate ability to identify patterns in complexity, which is what only the most creative of scientists can achieve. This skill, before even collecting any data, to instinctively identify the link and that which has been previously missing will forever be astounding.

The tempering of this with “If it’s going to be true, you have to make sure that it’s true” shows the structure and process that true scientists exhibit – rather than trying to prove herself right, she was dedicated to prove herself wrong. To find the hole, the gap, and as each plausible alternative theory disappeared she gathered evidence to show how vital Telomerase is into the conservation of cellular division and preventing the rapid loss of genetic information and cellular ageing.

Often as scientists we forget in our efforts to attain a goal the purpose of science has always been to falsify. We lack the capacity to prove something correct, only incorrect – and that is why even the most famous scientists produce theories instead of ‘fact’. This is not a reflection of the research quality but rather defined by the foundation on which true science is built. The mark of a great scientist is perseverance, the dedication of going to all possible lengths to prove themselves incorrect, in order to eventually suggest a plausible theory.

A great scientist possesses not only the ability to identify patterns but also to endlessly question these, in an effort to attain the most base level truth. Curiosity driven and persistent exploration defined Blackburn’s work, and this ethic which she has left us with continues to inspire fellow young Australian girls to pursue their STEM endeavours in the footsteps of a truly great scientist.